Press release
PRYSMIAN, SECURES CONTRACT WORTH AROUND € 250 M FOR A SUBMARINE POWER CABLE LINK BETWEEN THE NETHERLANDS AND DENMARK

THE COBRACABLE HVDC LINK IS KEY FOR A SUSTAINABLE EUROPEAN ENERGY

Milan, 1 February 2016. Prysmian Group, world leader in the energy and telecom cable systems industry, has been awarded a new contract worth around € 250 million for an HVDC (High Voltage Direct Current) submarine interconnector that will link Denmark and the Netherlands, by TenneT TSO B.V. and Energinet.dk SOV, the operators of the Dutch and of the Danish power transmission grids, respectively.

The COBRAcable (“COpenhagen BRussels Amsterdam”cable) will provide benefit to the electricity grids of both countries involved, as it will make Dutch power capacity structurally available to Denmark and vice versa, increasing security of supply and enabling the further integration of renewable energy into the electricity grids.

The COBRAcable interconnector will therefore contribute to the realisation of a sustainable international energy landscape, a key aim of the European Union, who is to support the project through the EEPR (European Energy Programme for Recovery). The connection will be constructed using High Voltage Direct Current (HVDC) technology, which minimizes transmission losses over the long distances involved.

“This important award reconfirms our prominent role in the submarine cables sector – states Massimo Battaini Senior Vice President Energy Projects at Prysmian Group – as well as acknowledging our commitment to the development of smarter and greener power grids. We are very pleased and most proud of having been chosen alongside Siemens to undertake this challenging project by reputed and long standing customers“.

The contract awarded to Prysmian involves the turn-key supply and installation of an HVDC bipole – using single core cables with extruded insulation technology – that will operate at a voltage level of ±320 kV with a rating of approximately 700 MW, equivalent to the annual electricity consumption of all households in the cities of Rotterdam and Amsterdam combined. It will run along a total route of around 325 kilometres, from Eemshaven (NL) to Endrup (DK) via the German sector of the North Sea, and will include two onshore lengths of 1 km on the Dutch side and 25 km on the Danish side to link to the onshore converter stations, which are to be provided under separate contract by Siemens.

All cables will be produced in Arco Felice (near Naples, Italy) and Pikkala (near Helsinki, Finland), the Group’s centres of technological and manufacturing excellence for submarine cables. Prysmian is currently building on recent investments made in its Pikkala factory with a further approximately € 10 million upgrade to existing production lines, to significantly increase its manufacturing capacity of extruded HV submarine cables.

The marine cable laying activities, which will be performed by the Group’s own cable-laying vessels, the Cable Enterprise and the Giulio Verne, will also see the use of their newly acquired barge. Following the completion of its conversion in the next months, which shall include the fitting of a 7000 mT turntable, this barge shall offer Prysmian an extended and versatile range of installation capabilities, not least with its suitability for shallow water cable installation. Delivery of the cable system is scheduled by the 3rd Quarter of 2018.

Prysmian Group
Prysmian Group is world leader in the energy and telecom cable systems industry. With more than 130 years of experience, sales of nearly €7 billion in 2014, some 19,000 employees across 50 countries and 89 plants, the Group is strongly positioned in high-tech markets and offers the widest possible range of products, services, technologies and know-how. It operates in the businesses of underground and submarine cables and systems for power transmission and distribution, of special cables for applications in many different industries and of medium and low voltage cables for the construction and infrastructure sectors. For the telecommunications industry, the Group manufactures cables and accessories for voice, video and data transmission, offering a comprehensive range of optical fibres, optical and copper cables and connectivity systems. Prysmian is a public company, listed on the Italian Stock Exchange in the FTSE MIB index.

This press release is available on the company website at www.prysmiangroup.com and in the mechanism for the central storage of regulated information provided by Bit Market Services S.p.A. at www.emarketstorage.com. 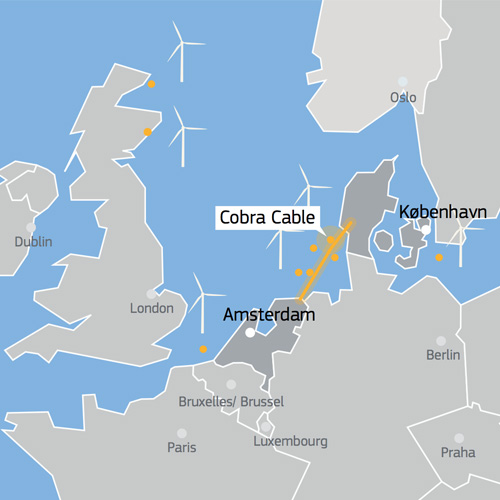