Prysmian has marked the launch of local manufacture of its new FlexTube cable technology last week with yet another world’s first – the installation of its highest fibre count cable to date.

TPG, one of Australia’s leading Telcos, required the highest fibre count cable possible, in an ultra-dense single cable solution for a particular application. Using its innovative FlexTube technology, Prysmian responded, manufacturing a cable with a capacity of 2112 fibres.

“It is not only the highest fibre count cable ever manufactured by Prysmian but it also exhibits the world’s highest fibre density. The 2112 fibres are contained within a single sheath 24mm in diameter, making it the highest density optical cable solution in the world, with a record breaking 4.7 fibres/mm², The cable was designed to be slim enough to fit inside a 32mm subduct (with an internal diameter of just 28mm!!), fully maximising the available space,” said Jack Clements, Technical Sales Manager at Prysmian Australia.

Prysmian has partnered with TPG telecom for many years and TPG was one of the first companies in Australia to trial the FlexTube product. FlexTube is a revolutionary cable, designed to be extremely compact, light-weight and flexible and also much faster to install. Using FlexTube, Prysmian continues to lead the way in ultra-dense cable solutions and this new record-breaking cable sees the company add to its already extensive FlexTube range.

A 1.8km section of the 2112F cable was deployed in Melbourne CBD on Friday and installed within a subduct of 28mm internal diameter. The cable was spliced at both ends using Prysmian’s latest high capacity joint enclosures. The joints are able to store up to 2688 fibre splices and are modular in design, able to be scaled up and down depending on the customer’s requirements.

“Prysmian continues to push the boundaries in terms of telecom solutions. We respond to market demand through innovation and currently the market is demanding higher capacity cables. It’s not just about offering new innovative cable designs but offering a complete network solution including jointing and connectivity products, “said Alice Codenotti, Key Account Manager at Prysmian Australia.

“Being able to install over 2000 fibres in one go brings us major advantages in terms of installation costs per fibre and utilisation of our infrastructure. It also helps us secure capacity in high demand areas, helping us to future proof our fibre network.” Said Liz Goyeneche, Network Design and Planning Manager at TPG Telecom.

“We installed Prysmian’s 1728F cable last year and this year we’re up to 2112F in a single cable. The technology continues to develop and at TPG we’re keen to utilise the latest cutting edge products to respond to the evolving needs of our customers,” said Reggie Naik, General Manager – Fibre Operations at TPG Telecom.

“We are very excited to be able to manufacture FlexTube cable locally,’ said Alice Codenotti. “Adding FlexTube manufacturing capacity to our factory in Sydney makes it one of the largest telecom factories in the APAC region, enabling us to better service a growing local demand.”

The FlexTube range of cable is available from Prysmian Cable.

Prysmian Group is the global leader in the high-technology cables and systems for energy and telecommunications, operating in 50 countries with 88 manufacturing plants and around 19,000 employees worldwide; 500 of those are located across Prysmian’s three manufacturing plants in Australia and New Zealand. Their global headquarters is based in Milan, Italy. 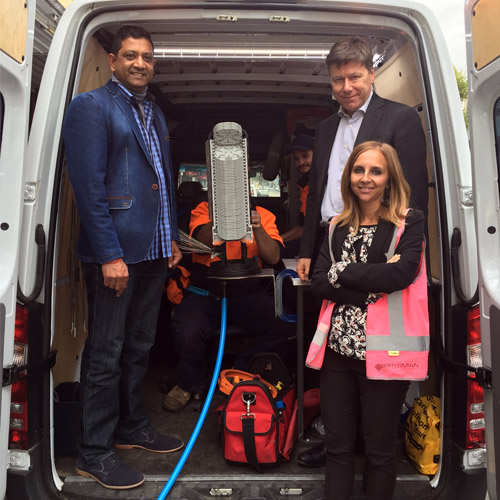